END_OF_DOCUMENT_TOKEN_TO_BE_REPLACED

In the summer months, more specifically at the end of July and at the beginning of August, the Summer European Youth Olympic Festival will be taking place in Tbilisi.This is a sports event for talented young athletes from across Europe, who are fighting for the gold medal. EYOF is an excellent warm-up for the “real” Olympic Games. Just like at the Olympic Games, the athletes at the EYOF are staying in the Olympic village. There will be over 3800 athletes from 50 European countries taking part in the competition and they will be competing in 9 disciplines:

For the first time in the history of the EYOF a 6 competition day format has been implemented. This extension (from 5 to 6 days) allows adapting both the competition and training programmes and lowering the pressure on the athletes.

We’re in for a fun and interesting event at which the focus will be on the young athletes that get to experience what such big competitions are like and can start getting to know each other. Volunteers will be available to the athletes and organizers form the 1st of March; there will be up to 2000 of them at the scene for 3-6 months.

The grand opening ceremony will take place on the 26th of July in the Mikheil Meshki Arena ( theLokomotiv stadium) with a capacity of 23 000 people. The program consists of the official protocol, the athletes' parade, lighting of the Flame, taking oaths, key speeches and an artistic performance that combines the European and Georgian culture with a historical and traditional element. The opening will last up to 100min.

The closing ceremony will be on the 1stof August in the Olympic village.

The athletes that will make up the Slovene representative team will be known in July.

For the visitors (Georgia) 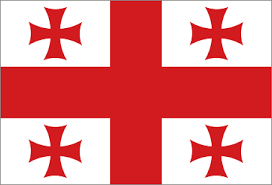 Georgia is a coastal country in the Caucasus region of Eurasia that is bounded to the west by the Black Sea. It is a former USSR republic and is bounded to the north by Russia, to the south by Turkey and Armenia and to the southeast by Azerbaijan. Georgia has a rich historical background, magnificent architecture and local cuisine and an abundance of natural beauty. It is also known for its grapevine.

Georgian culture evolved over thousands of years and its foundations lie in Iberian and Colchian civilizations. In the 11th century Georgia enjoyed a golden age and renaissance of classical literature, arts, philosophy, architecture and science. Georgian culture was influenced by Classical Greece, the Roman Empire, the Byzantine Empire and later by the Russian Empire. Georgians have three alphabets and some of their most famous writers are Nikoloz Baratashvili, Akaki Tsereteli and poet Shota Rustaveli.

Tbilisi is the capital and the largest city of Georgia. It lies on the banks of the Mtkvari River, acquiring its name after the warm sulphur springs. The name originated from the word 'tbili', which means warm. Tbilis' population is about 1 400 000.

Tbilisi was founded in the 5th century. King Vakhtang Gorgasali (AD 446-502) went hunting and wounded two pheasants, sending his falcon in pursuit. After the long search the two birds were found boiled in a hot spring. King Gorgasali was so impressed with the naturally hot sulphur water that he decided to found a city near the springs and call it Tbilisi. Because of its south-eastern location it was in close proximity to the east-west trading-routes. To this day it serves as an important transit route for global energy and trading projects. Tbilisi’s rich history is reflected in its architecture, which is a mix of medieval, classical and Soviet structures. Lots of modern buildings are being constructed and that makes the 1500 years old city more distinguished and interesting. The combination of original architecture and natural beauty gives the city its charm and color.

Tbilisi runs in a narrow strip on both banks of the river and its narrow, curved streets run up the slopes of the mountains, where the houses are placed, making a terrace above one another. The Old town is where the soul of Tbilisi lies; houses wreathed with vines, ancient churches, the ruins of old monasteries and traditional Georgian yards with intricately carved porches.

Tbilisi has a number of important landmarks: The Parliament, the Supreme Court of Georgia, the Georgian National Museum, the Tbilisi Opera and Ballet Theatre, the Sameba Cathedral, the Vorontsov's Palace, the National Public Library. During the Soviet times, Tbilisi ranked in the top 4 cities in the Soviet Union for the number of museums.

P.E.A.K.Y is the name of the EYOF Tbilisi 2015 official mascot. The name is a combination of the words "peak" and "youth". The mascot resembles the Kolkheti pheasant connected with the legend on founding Tbilisi. The bird is associated with speed and rapidity.

P.E.A.K.Y made its first public appearance in the streets of Tbilisi on the 21th of January on the International Hug Day. The cute mascot hugged every person meeting in the street. 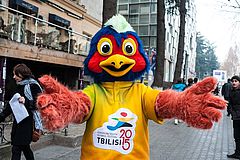 The Summer European Youth Olympic Festival in Tbilisi will take place at 11 different competing arenas, as well as 5 areas for preparations and training. All the venues are 25-40min away from the village where the athletes will be staying during the festival. 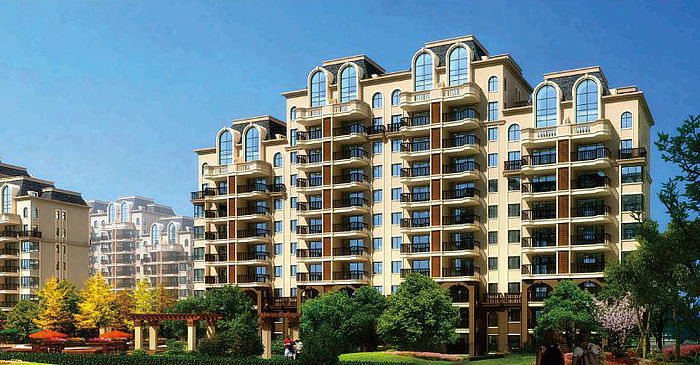 The Athletes' village is newly built and is located in Tbilisi Varketili District, which is close to the Tbilisi Sea. The convenient location and amenities will provide participants with suitable conditions for both rest and leisure. It is divided into 9 sections that are connected by 31 entries. The whole territory is fully secured and can only be entered with a valid accreditation card. There are 3804 beds available for athletes and other team-members. The Dining Hall is located within the AVL, close to the building with the fitness centre and swimming pool.

There is a Fun Zone at the edge of the village, where the closing ceremony will take place. The Fun Zone is a place of relaxation, where all the athletes can relax and enjoy themselves after the competitions and communicate without pressure. There will be evenings full of amusement and entertainment. Between the 27th and the the 31th of July a 2 hour entertainment program will be offered from 20:00 – 22:00.

This venue has 9 outdoor and 2 indoor tennis courts with an all-weather artificial hard surface, where the matches will take place between the 27th ofJuly and the 1st of August. The main court can accept up to 700 spectators, the other 8 courts are meant for practice as well as matches. It is 18.9km (32min) away from the athletes village. The venue includes locker rooms with showers, doping control, VIP area, judges meeting room, result evaluation, equipment storage, a volunteer room, a room for officials, a media centre, a medical room andcatering facilities.

The athletes have a chance to prepare in the ‘Vake Park Courts’ that has two tennis courts and is a 5min drive from the main venue.

The swimming pool was built in cooperation with the Georgian swimming association especially for the European Youth Olympic Festival. The outdoor pool is a modern Olympic pool with a 50m track. There is also an outdoor pool for practice and training with ten 25m tracks. The venue can accept an audience of 3000 and is 17,4km (24min) away from the village. The venue includes locker rooms with showers, a volunteer room, a room for officials, a media centre, a call room, a medical room and catering facilities for spectators.

This newly built venue will host the gymnastics competition, taking place from the 28th of Julyto the 1st of August. There are two big halls that can accept 1294 spectators. The first hall is meant for matches and the second one for practice and training. The venue offers locker rooms with showers as well as medical spaces, VIP area, press tribune, a room for volunteers and judges and a catering facility for spectators. The venue is 17,4km (24min) from the village.

This newly built stadium can accept up to 3300 spectators. There will be female and male matches going on here between the 27th of July and the 1st of August. The stadium is 23,1km (40min) from the village. The venue offers a media center, doping control, a room for referees and VIP area.

The athletes can practice in the ‘HandballArena’ 1 and 2, that are a 5min walk from the main venue.

This stadium was built especially for the festival. It has two halls, one for female volleyball and one for male. The halls can accept an audience of 1700 and they are 17,4 (24min) from the village. The venue includes locker rooms with showers, a media centre and offices.

The athletes will compete in judo from the 28th of July and the 1st of August. The ‘JudoAcademy of Georgia’ (named after Shota Chochishvili) can accept an audience of 880. The stage with two tatami will be placed in the competition hall. The venue includes two changing rooms, locker rooms with showers,a volunteer room, a room for officials, a media centre, a call room, VIP area, a medical room and catering facilities.

Practice is possible inside the academy on three tatami. The academy is 20,8km (28min) away from the village.

The athletics competition will take place from the 27th of July to the 1st of August. The hall can accept 3000 spectators and is 17,4km (24min) away from the village. There are eight extra sprinting lanes alongside the athletics track, where the athletes can warm-up. The venue includes catering areas for visitors, a medical area and locker rooms with showers. The stadium has the following competition sites: 8 lanes, 2 high jump sites, 2 pole vault sites, 4 sites for long jump, 4 sites for triple jump, 2 shot put circles, 1 combined discuss/hammer circle, 1 javelin site.

Practice and training is possible in the ‘Athletics Indoor Palace’ that is a 15min walk from the main venue and 19,5km from the village.

This venue will host female basketball between the 27th of July and the 1st of August. It can accept 2254 spectators and is 19,3km (33min) away from the village. The venue includes locker rooms with showers, a volunteer room, a room for officials, a media centre, a medical room and catering facilities. Practices are possible on three basketball courts in the “Basketball Sport School” on the Tsereteli street that is 19,5 (33km) from the village.

This venue will host the male basketball team between the 27th of July and the 1st of August. The venue has two basketball courts that accept 8527 spectator and are 18,5km (33min) away from the village, located in downtown Tbilisi. There are changing rooms with showers and bathrooms, catering facilities, a medical room, a room for officials and a volunteer room available. Practices are possible on three basketball courts in the “Basketball Sport School” on Tsereteli street that is 19,5 (33km) from the village.

The bicycle race will start and finish at the “King David Avenue” that is 22km (30min) away from the village. Both routes will be equipped with temporary construction in order to match all of the requirements of the European Cycling Union.The female and male race will take place on the 28th ofJuly on a 9,7km long track. The team manager's car will be allowed to follow the rider in the individual time trial.

The road race will take place on the 30th of July on an already built venue, made only for bicycle races. The 23km long route runs by the Tbilisi Sea, starting and finishing next to the village (6,3km away). The female race is 47,400km long and the male race is71,700km long. No team cars will be allowed to follow the riders in the road race. Three neutral service cars will follow the peloton.