END_OF_DOCUMENT_TOKEN_TO_BE_REPLACED

EYOF means European Youth Olympic Festival: a biennial sporting event for talented young participants from all over Europe. They will go for gold in nine different Olympic disciplines. This makes the EYOF a perfect warm-up for the ‘real’ Olympics. Just like at the Olympics, the young sports boys and girls will live in the Olympic Village. There’s an opening and closing ceremony and of course an Olympic Flame and Olympic Flag.

The nine Olympic sports that are part of the EYOF are: athletics, basketball, cycling, gymnastics, handball, judo, gymnastics, swimming, tennis and volleyball. All these sports are regulated by the rules set by the international sports federation. Further information can be found on the specific sports’ subpages.

The tournament’s director is Olympic swimmer Pieter van den Hoogenband. In 1993 he competed in the European Youth Olympic Festival that was held in Valkenswaard, The Netherlands. There he won a gold medal and, as he puts it, and that’s where his ‘Olympic Dream’ started. Now exactly twenty years later the EYOF will return to The Netherlands. And Pieter van den Hoogenband, triple Olympic champion, is in charge of this event. 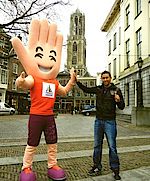 The mascot of the European Youth Olympic Festival 2013 has a name: ‘Youthie’. This name was chosen from hundreds of entries sent in from all over Europe during the past weeks. The winning name was suggested by the Utrecht student Yassine Beqqali (23), presenter at RTV Utrecht and a keen sportsman.

During EYOF Utrecht 2013 Youthie will be visible all over the place. But also in the months before the festival he will show up a lot, both in person as digitally. Youthie has his own Facebook page: Youthie – EYOF Utrecht 2013 Mascot. Youthie was designed by Utrecht School for the Arts student Mariejem Tordjo and represents ‘High Five’. High Five symbolizes sportsmanship and friendship. It’s also the connecting factor between all the activities before and during EYOF Utrecht 2013. Therefore the mascot looks like a friendly, athletic and happy hand, with its enthusiasm he is a source of inspiration for young talents from all over Europe.

The nine Olympic sports that are part of the EYOF are: athletics, basketball, cycling, gymnastics, handball, judo, gymnastics, swimming, tennis and volleyball. All these sports are regulated by the rules set by the international sports federation. Further information can be found on the specific sports’ subpages.

Participants of the EYOF can be no older than 18 years, however the different sports have their own age categories. They are young talented sports people, who are guided on their way to the top of their sports. For them gaining international experience is essential. EYOF offers that experience by showing them all aspects of the real Olympic Games. Like those Olympic Games the EYOF has summer and winter editions. In 2013 the winter edition will be in Brasov, Romania.

‘Het Lint’ is a unique track right round the Maximapark in Leidsche Rijn to the West of Utrecht. It’s the only one of its kind in the Netherlands, having a special built-in time registration system. With its smooth surface and the lack of any obstacles like road crossings or speed bumps, ‘Het Lint’ is ideal for the cycling events of the EYOF.

The Utrecht Trade Fair is a well-known complex for conventions, concerts and fairs in the middle of Utrecht city. Ideally accessible thanks to its location directly next to Utrecht central train station. In the halls of the Utrecht Trade Fair there will be room for the judo matches as well a both the handball and volleyball tournaments.

Football stadium ‘De Galgenwaard’ is probably best known for the matches of FC Utrecht. But during the EYOF 2013 in Utrecht this is where the gymnastics will be held. Not on the grass of the pitch, but in the sports halls within the complex. All gymnastic events can be held there. The location is also easily accessible from both Olympic Villages.

Athletics centre Maarschalkersweerd will function as the venue for all the athletics events. The center has the usual 400 meter track for all the running, hurdles and steeplechase events and a field for the jumping an throwing components. This EYOF locations is also just a stone’s throw away from both Olympic Villages.

The tennis matches will be held on the gravel courts of tennis park Den Hommel in Utrecht-West. This tennisclub is the biggest in the central part of The Netherlands. It offers all the facilities needed for this big sports event.

At swimming pool ‘De Krommerijn’ a new, specially designed stainless steel pool is being built. It will be done right in time for the EYOF. The temporary pool that is located nexted to the new one, will remain so it can be used for trainings and warming up by the young swimmers. The pool is practically between both Olympic Villages.

Near the Olympic Village at ‘De Uithof’ is sports center Olympos. This is the sports complex of the institutes for higher education in Utrecht. It is also the venue for the basketball tournament of the EYOF.

The international campus of the University College Utrecht is located on the former grounds of a military barracks. In the summer of 2013 it will be transformed into one of the two Olympic Villages of the EYOF. The participants will be housed in what is usually the students’ dorms and a big festival tent will be set up on the site.

The second Olympic village will be on the grounds of the Utrecht Sciene Park. The participants here will be housed in so called ‘flex-hotels’: accommodations specially built up for the participants. The catering will be done by the canteens at the Science Park.

The Netherlands is a constituent country of the Kingdom of the Netherlands, consisting of twelve provinces in North-West Europe and three islands in the Caribbean. The European part of the Netherlands borders the North Sea to the north and west, Belgium to the south, and Germany to the east, and shares maritime borders with Belgium, Germany and the United Kingdom. It is a parliamentary democracy organised as a unitary state. The country capital is Amsterdam and the seat of government is The Hague.The Netherlands in its entirety is often referred to as "Holland", although North and South Holland are actually only two of its provinces.

The Netherlands is a geographically low-lying country, with about 20% of its area and 21% of its population located below sea level, and 50% of its land lying less than one metre above sea level. This distinct feature contributes to the country's name: in Dutch (Nederland), English, and in many other European languages, its name literally means "(The) Low Countries" or "Low Country". Most of the areas below sea level are man-made, caused by centuries of extensive and poorly controlled peat extraction, lowering the surface by several meters. Even in flooded areas peat extraction continued through turf dredging. From the late 16th century land reclamation started and large polder areas are now preserved through elaborate drainage systems with dikes, canals and pumping stations. Much of the Netherlands is formed by the estuary of three important European rivers, which together with their distributaries form the Rhine-Meuse-Scheldt delta. Most of the country is very flat, with the exception of foothills in the far southeast and several low hill ranges in the central parts.

Utrecht city and municipality is the capital and most populous city of the Dutch province of Utrecht. It is located in the eastern corner of the Randstad conurbation, and is the fourth largest city of the Netherlands with a population of 316,448 on 1 February 2012.

Utrecht's ancient city centre features many buildings and structures from the Early Middle Ages. It has been the religious centre of the Netherlands since the eighth century. Currently it is the see of the Archbishop of Utrecht, the most important Dutch Roman Catholic leader.[1][2] Utrecht is also the see of the archbishop of the Old Catholic church, titular head of the Union of Utrecht (Old Catholic), and the location of the offices of the main Protestant church. Until the Dutch Golden Age, Utrecht was the most important city of the Netherlands; then, Amsterdam became its cultural centre and most populous city.

Utrecht is host to Utrecht University, the largest university of the Netherlands, as well as several other institutes for higher education. Due to its central position within the country, it is an important transport hub for both rail and road transport. It has the second highest number of cultural events in the Netherlands, after Amsterdam.

OG and other games results

1st day on EYOF in Utrecht

Presentation of the teams for EYOF 2013

The final day of the European Youth Olympic Festival in Utrecht proved to be the most successful for Slovenian athletes.

The men’s handball and women’s volleyball teams won gold medals while bronzes were won by judoist Rok Polajžer (up to 90 kg), Leda Krošelj in the pole vault and swimmer Neža Kocijan. Voleyball players played their final match against Serbia, beating them with 3:1 (22, 12, -24, 33), while the handball team won over Norway with 28:23 (19:11).

“It feels amazing. It was a quiet shared dream, but now we did it. We proved that we can win over anybody, even though we are a small country,” said Urh Kastelic, one of the heroes of today’s win after the tournament, who locked his gates in the final part of the second period. “I’m super satisfied, but without such defense and the team, I could not have done it. It’s a team sport," added Kastelic, who will be carrying the Slovenian flag at the closing ceremony.

“None of us could believe it, especially the first two sets. Then our lack of concetration in the third set again showed its teeth. In the fourth the provocations started on the net. We said we will not give it to them, as it’s ours. We simply left our heart out on the field," said volleyball player Eva Mori, who will be playing with the rest of the team at the World Championships in Thailand at the end of July.

At the 12th EYOF, the Slovenian team won a record 11 medals. Gold medals were won by the women’s volleyball team, Aneja Simončič in the 400 m hurdles and the men’s handball team, a silver by Leda Krošelj in the pole vault and bronzes by judoists Andreja Leški, Luka Harpf and Rok Polajžer, high jumper Lara Omerzu, Tina Božič in the triple and long jump and swimmer Neža Kocijan.